I have a soft spot for Grille 3501. Firstly, they make the best short ribs in the Lehigh Valley, hands down. Secondly, in my opinion, Grille 3501 was ‘the’ restaurant in the Lehigh Valley way before any of the newcomers started sprouting up in Bethlehem, Allentown, and Easton. Back then, they were the only restaurant that could be considered to have an adventurous and consistent menu, and they were also one of the only bars with respectable cocktail offerings that weren’t ENTIRELY comprised of cloyingly-sweet, overpriced martinis.

While the competition has quickly caught up in recent years, Grille 3501 still holds their own in the Lehigh Valley’s rapidly changing dining scene. If you somehow haven’t previously been to Grille 3501, or haven’t visited within the past 18 months, a lot has changed. They’ve built a new addition called “The Loft at 3501”, which is a strikingly beautiful 2-story space. It has a brand new bar and an open air patio for the warmer months, with retractable doors for when it’s not so warm outside. It’s definitely an experience that is unique to the Lehigh Valley.

This rest of this review is going to work more like a cautionary tale. Learn from my mistakes, and always read your menus. Thoroughly.

I’ve ordered this burger in the past, albeit a few years ago, and I remember it being quite good actually, so I wasn’t exactly anticipating any problems. However, when the burger arrived, it was pretty clear there had been a lapse in communication. Judging by the picture, can you tell what’s wrong? Did you say there’s NO CHEESE? Then you’d be correct!

At first, I was confused. “Did they forget to put cheese on my burger?”, I thought calmly to myself, before asking the same question aloud in an audibly more panicked tone. Did I somehow accidentally order just a regular no-cheese burger?? How is it possible that this burger is COMPLETELY NAKED???

After looking at the menu again, I realized what I had done. I simply said “could I please have the Angus Burger”, without specifying any additional toppings. In a nutshell, this was completely my fault, and I totally overlooked the fact that ALL additional toppings were a la carte. But on the other hand, I don’t believe it would’ve been asking too much of our server to double-check that I didn’t want anything but a patty of ground beef between 2 dry buns. Considering all additional toppings are .50¢ extra, up-selling not only helps the restaurant, but her own bottom line as well.

Now, I’m never one to give wait staff a hard time. That’s just not me, and quite frankly, I’m about the most easy going patron you’ll ever meet. So I wasn’t going to call our server back over to have them put cheese on it, and besides, we were already running a little late for another engagement later that afternoon, so I was worried asking them to re-fire the burger would’ve made us even later. Besides, I felt like I was mostly at fault for the the sad, cheeseless orphan sitting before me.

Anyway, back to the review. Since there was no realistic way I was getting cheese on this burger, I felt like I had to salvage it the best that I could. I needed something else on it; anything to make this more than just meat and bread. There was ketchup in a cup on the plate for dipping fries in, but since putting ketchup on a burger is Un-American, I asked the server for a side of mustard, which luckily, turned out to be a very good coarse whole grain mustard. Unfortunately, the mustard only went so far in saving this burger. It was still far too flat and lacking any sort of character. Thankfully, even though the patty was mostly under-seasoned, it was grilled well with nice char and crust, and overall, actually quite good.

The bun was the only other high point. Nice and buttery brioche with a wonderfully crisp outer crust and soft and fluffy on the inside. Pretty much anything you could ask for in a bun.

As for the toppings, I wish I had something more to review. I considered giving the toppings score a “0”, but the lettuce and tomato were at least fresh. Unfortunately, I can’t review any of the cheese options, since there wasn’t any on my burger. What’s even more disappointing is the lack of topping options. No house-made aioli or special 3501 sauce or anything cool or interesting or different.

On to the fries. I can tend to be picky about fries, but typically, I’ll enjoy them no matter what because fried potatoes are one of mankind’s greatest accomplishments. With that said, for me, there’s only one thing that will completely ruin a french fry, and that’s when they’re battered. Why. Why would anyone in their right mind want to batter something that is already so starchy? The only thing batter does is trap extra grease and steam, causing the fry to become soggy too quickly, and completely masks any potato flavor that may be lingering in there. Whether it’s at a dive bar or upstanding establishment like Grille 3501, every battered french fry I’ve ever had tastes exactly the same: like it was just pulled out of a freezer and dropped into a vat of hot oil. Perhaps you’ve gleaned that 3501’s fries are… sigh… battered. They were crispy when they first arrived, but very quickly became soggy on the outside and mealy on the inside inside. I’ll never understand battered fries.

Final Thoughts: While the foundation of this burger (patty and bun) is very good, the rest of the burger is completely mailed-in and uninspired. For as good as the rest of Grille 3501’s menu is, I wish they’d put more thought and creativity into their burger. With some extra seasoning in the burger and more interesting topping options – such as a house sauce and/or house pickle – this could easily be one of the best burgers in the Lehigh Valley.

A 16.5/30 review totally wasn’t what I was expecting, and goes to show how important toppings and sides are to bringing a good burger together. For as much as I like Grille 3501, I’m determined to make this burger redeem itself. I’ll go back soon, and when I do, I’ll be sure to order a cheese, along with the sautéed portobello and onions. 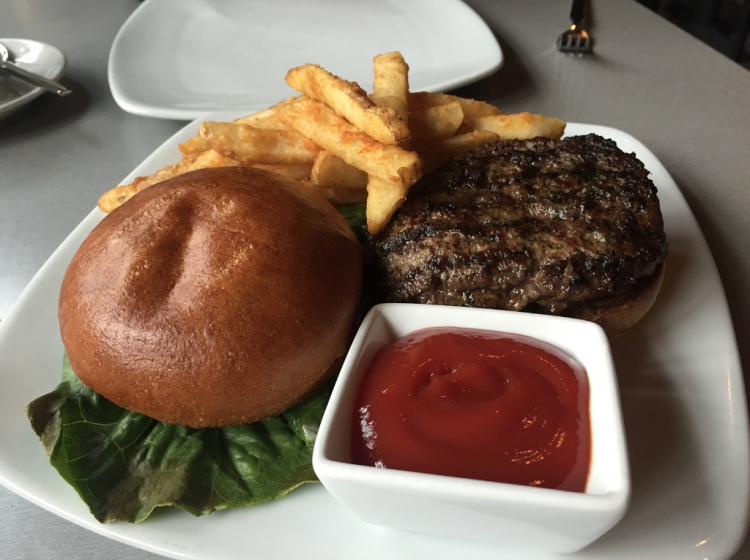 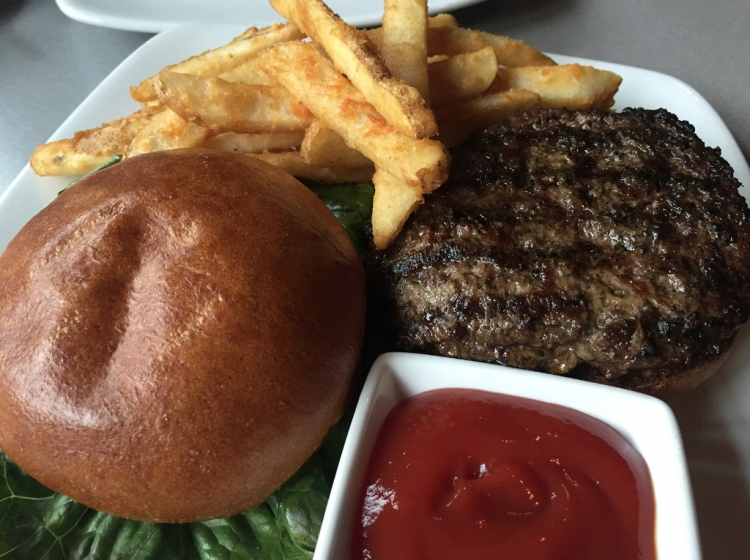 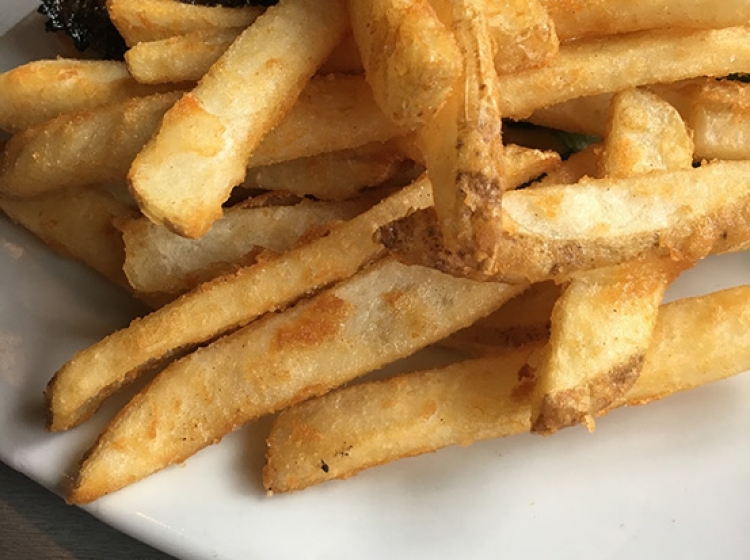 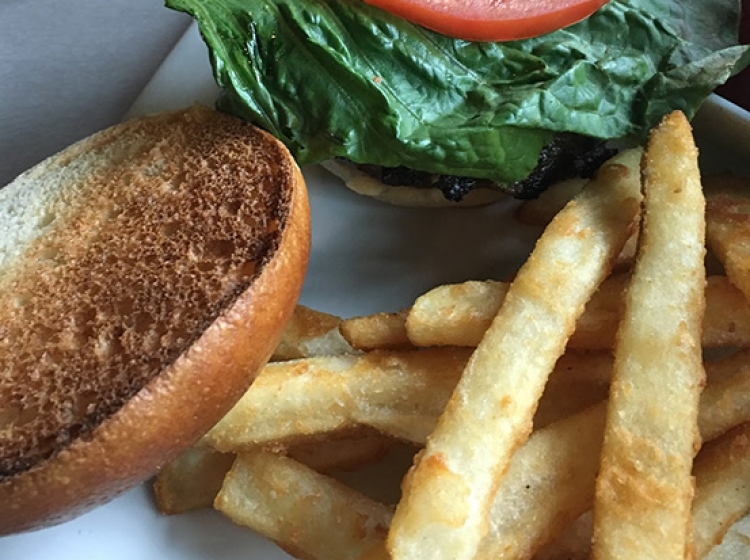 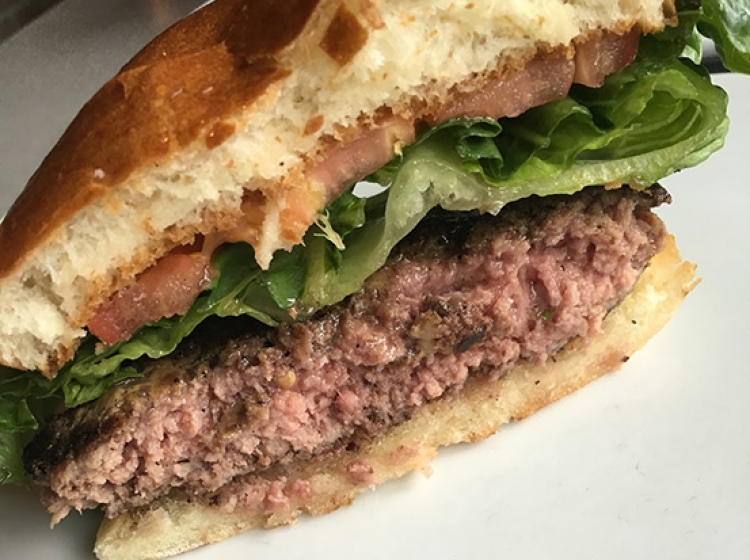