Bookended by a recently relocated Shula’s Steakhouse and newly opened Starbucks (Downtown Allentown has a Starbucks!!), The Hamilton Kitchen stands out as downtown Allentown’s premier hip, high-end hotspot. If you’re at all familiar with Allentown’s recent dining resurgence, you’ve probably already heard of, and probably already been to Hamilton. Accompanying the aforementioned corporate big shots, Hamilton is also joined by promising upstarts Roar Social House, Dime Allentown, Grain, Centro, and Hook, all within 2 blocks of City Center. The dining scene in downtown Allentown is all of a sudden starting to become quite crowded, when 18 months ago, there was almost nothing to do downtown. But let’s save that for another story.

The Hamilton is the type of place that I’ve hoped would arrive in the Lehigh Valley for many years: a restaurant located in a resurgent urban setting with attractive outdoor seating, amazing views, a vibrant city vibe, and a modern, ambitious and ever-changing menu.

To be honest, I love this place. It’s the ultimate hangout and is always at the top of my list. With such an amazing, creative cocktails, phenomenal liquor choices, and a respective beer list, you can’t go wrong spending a night a The Hamilton.

But anyway, let’s get back to the burger.

I’ve eaten at Hamilton a few times previously, but it was finally time to try the burger. Normally, when it comes to burgers in the Lehigh Valley, price doesn’t factor into the equation of a review. But in this case, I think it has to. Keep in mind that one of the top Lehigh Valley Burger Blog reviews is Bolete with a score of 29.5/30, whose burger currently costs $18. Hamilton’s costs $17. So it’s only natural that I’m going to compare the two based on price.

Ordering the burger is straightforward: You can add bacon, mushrooms, or an egg for $1 each. But being the burger purist that I claim to be, I kept it natural, not ordering any of the aforementioned. At first sight, the burger is mostly unremarkable, and there’s nothing in the presentation that comes across as particularly high-end… quite frankly, the plate is a mess.

The burger arrives in 2 halves, with the burger on the bottom bun, and the toppings laying on an upside down top bun. It’s pretty apparent from the outset that the ratio of fresh toppings is disproportionate compared with the patty and bun; the cuts of lettuce tomato and onion are simply too much. Next time, I’ll request the burger without the LTO. When I try to pick up the burger, I realize the bottom bun is soggy with grease to the point of almost falling apart. Right now, it’s edging closer to becoming a fork-and-knife affair, which isn’t necessarily a bad thing, but a burger is a handheld experience that should never require utensils. The top bun, which seems to be a better representation of what it should be, is chewy and slightly on the dense side. As with most underwhelming burgers, there weren’t enough of the “fun” toppings such as the secret sauce and cheese.

I can’t really offer a sincere report on the sauce, as there simply just wasn’t enough of it on the burger to make any difference whatsoever, or enough to scrape off and try alone. Same with the cheese. It got completely lost with amount of LTO. Luckily, the highlight of this burger was the patty itself, which I would consider above average being generously seasoned, and perfectly cooked and charred, with a flavorful crust. Sometimes its the little salty, charred crunchy bits on a burger that can save it from complete ruin. The bacon and mushrooms were a nice touch. The mushrooms were nicely seasoned and sautéed, and the bacon was firm and flavorful. It would’ve been nice had caramelized onion been an option to go along with the mushrooms and bacon.

As for the fries, well, they were merely OK. I’m fairly certain they were battered, and wanted to confirm this with the kitchen, but our server neglected to report back with an answer. There seemed to be some kind of coating on the fries (perhaps they were just double-fried?), but it was pretty light and didn’t necessarily alter the flavor. Which is a good thing, because battered fries should be outlawed from any upstanding dining establishment. At the least, these fries were cooked well, decently crispy and well-salted.

Final thoughts: As I mentioned, I LOVE Hamilton. It’s always on my go-to list. There’s no better place I’d rather spend sipping cocktails and whisky with the new Downtown Allentownians. The problem is, when it comes to food, I’ve been disappointed more than I’ve been impressed, not even factoring in the price-to-quality ratio. The Hamilton, in my humble opinion, has become the ultimate hit-and-miss place in the Lehigh Valley. From my experience, I’m either going to love or be underwhelmed by my meal, and I’ve experienced both on multiple occasions. Overall, the Hamilton Burger is a decent burger, but could use some improvement. How? Omit the LTO, or at least make it an option rather than a standard. Add more cheese, way more sauce, and sear the burger a bit better to reduce sogginess of the bottom bun. It also wouldn’t hurt to work a little on the presentation so that it at least resembles a $17 burger. Perhaps my expectations were too lofty because I desperately want The Hamilton to excel in all areas. Or maybe this was another miss in the hit-and-miss mentality that has become common here. Would I order the burger again? Sure, I definitely would. I frequent The Hamilton often, especially for drinks, and sometimes there’s no better happy hour than enjoying a burger with your Manhattan. Who knows, maybe next time the burger will be better. 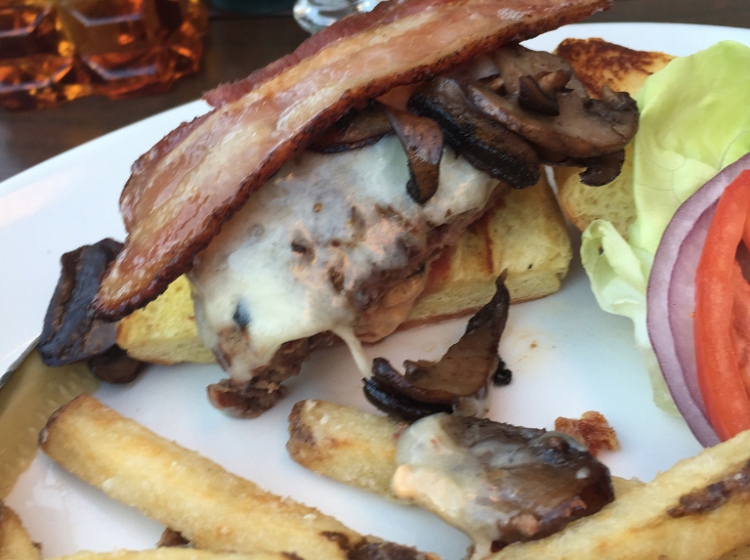 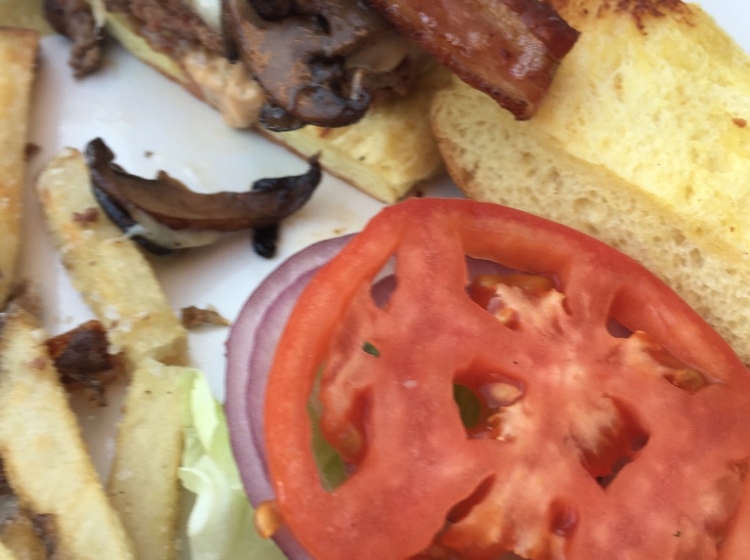 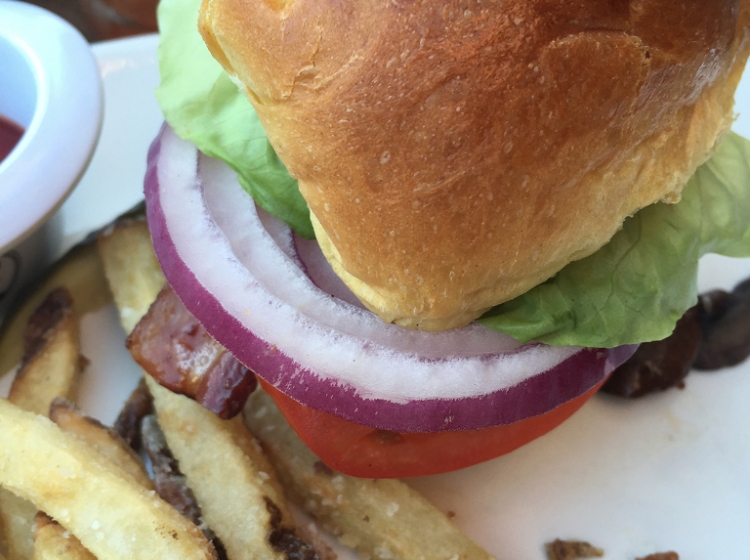 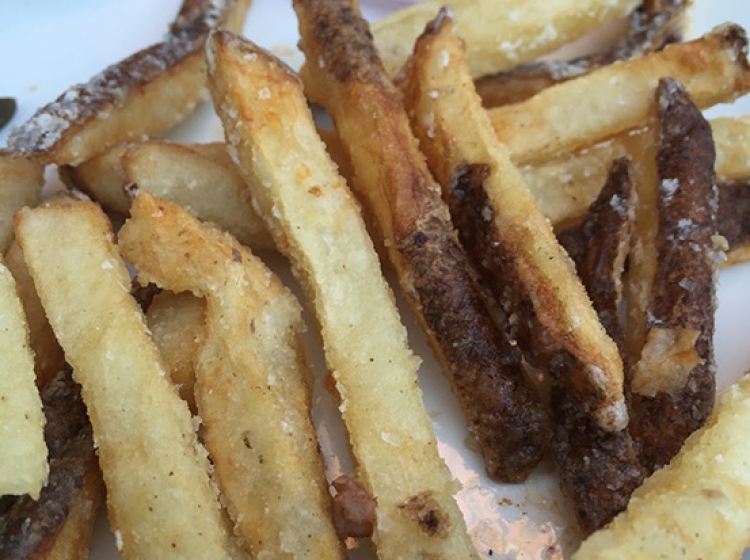