As of this very moment, Saranda’s is still relatively unknown and a bit of a hidden gem. Located on Broadway street in Fountain Hill, just minutes from SteelStacks and Lehigh University, Saranda’s is set in a beautifully renovated building dating back to 1850. With exposed stone walls and open wooden beam ceilings, the setting is definitely right for a rustic French-inspired menu.

We visited Saranda’s on a Friday night around 6:30pm, fully expecting the place to be busy, but were surprised to find the bar half-full and dining room entirely empty. Kind of shocking for a place to be this slow during such a busy dinner time. Although, by the time we finished our dinner, we were happy to see the bar and dining room fill up a bit.

When the burger arrives, there’s nothing fancy about the presentation, although it does look pretty impressive on the plate. Cutting into it reveals that it’s grilled more on the medium-rare side (I ordered medium), but no worries – if it can’t be perfect, I usually prefer that the burger is slightly undercooked, rather than overcooked. Judging by the description, if you guessed that this was a very rich, heavy burger, you’d be correct. There are a lot of elements on this burger that trend toward the fatty, creamy side, and that’s exactly how this burger eats. The patty itself is finely ground, has amazing flavor, is seasoned well, and it’s got just enough char from the grill, while also being nice and juicy. The foie butter has added just enough greasiness without being totally overwhelming, which is good considering the other toppings. The truffle aioli teeters just on the edge of being just a tad overpowering, but adds just enough earthy smokiness that you’d expect from anything truffle. I personally think truffle’s day has already passed in the culinary world, but there are still some instances where it’s a very welcomed flavor. Either way, truffle needs to be used VERY sparingly, and Saranda’s walks the balance nicely with their aioli. The goat cheese is a good choice for this burger, but a bit of a double-edged sword. Being a classic French cheese that fits in well on a burger at a French restaurant, it’s tanginess helps somewhat to cut through some of the richness in the burger. On the other side, however, the creaminess of the goat cheese just adds to the creamy mouthfeel of the burger… there’s too much softness, and not enough contrast in texture. The micro greens are a nice addition and added a layer of freshness. Plus, they’re fun… “Look at the tiny little leaves, honey! Ooo, a sprout!”

The sweet onion jam was a bit of a savior for this burger, and without it, I’m not sure I would have liked it as much. It’s smokey, tangy, and bright, and cut through the richness just enough to help meld the flavors together.

One of the more disappointing aspects of the burger was the brioche bun. Flavor-wise, the bun was alright, but it was simply too thick and bready, entirely throwing off the bun-to-burger ratio. I actually wound up tearing off about 1/2 of the bun to finish the burger.

As for the fries (aka pomme frites at French restaurants), I thought they were merely OK. Fairly thick and soggy, a thinner, crispier fry would’ve been much better to offset the overabundance of bread on the burger.

Final thoughts: it’s entirely clear that Saranda’s cooks are very skilled at their craft. In addition to a good burger, we sampled a few other small plates from the menu, and they were all delicious. When I’m not eating burgers, French food is easily my favorite kind of cuisine (what can I say, I love butter). While the burger was really good, it was also seriously rich and heavy, and chances are you’re going to leave Saranda’s with a bit of a food coma. If I could change anything about this burger, I’d reduce the thickness of both the bun and the fries. Adding an element of vinegar or salty brine to the burger, such as a house pickle or something similar, would really help cut through all the rich fattiness from the goat cheese, foie butter and truffle aioli. The sweet onion jam comes close to accomplishing this, but it’s just not tangy enough on its own. Would I get it again? Sure, but only to split with someone else. This burger is just too rich to eat by myself. 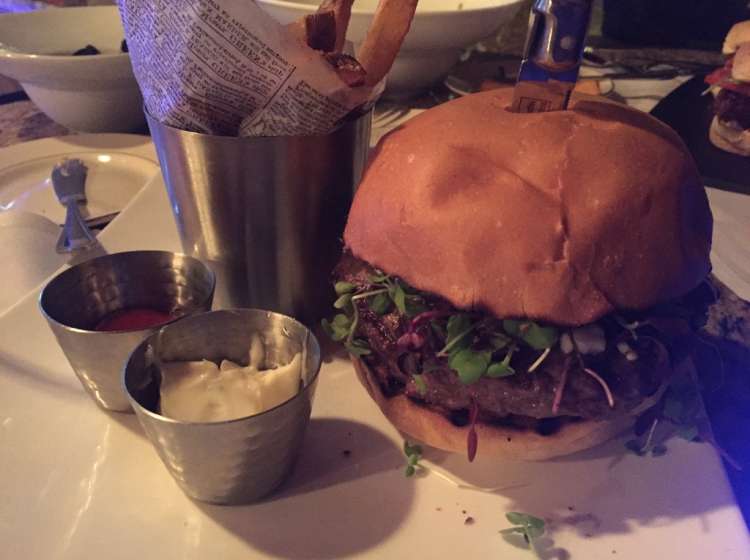 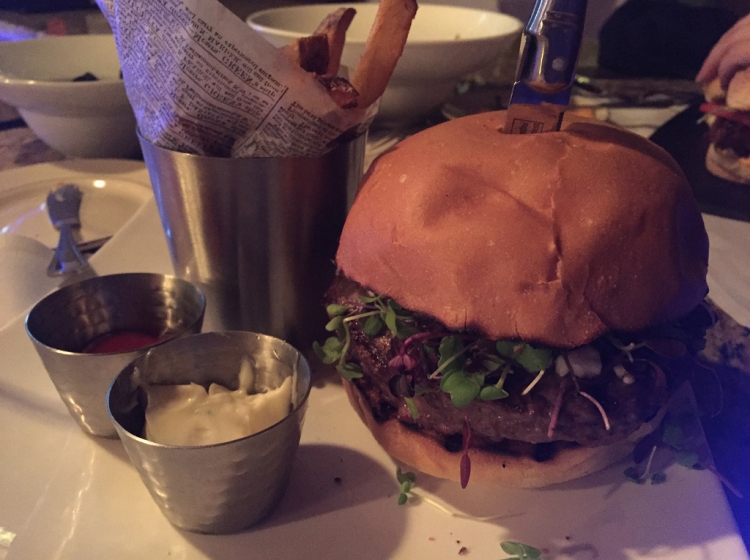 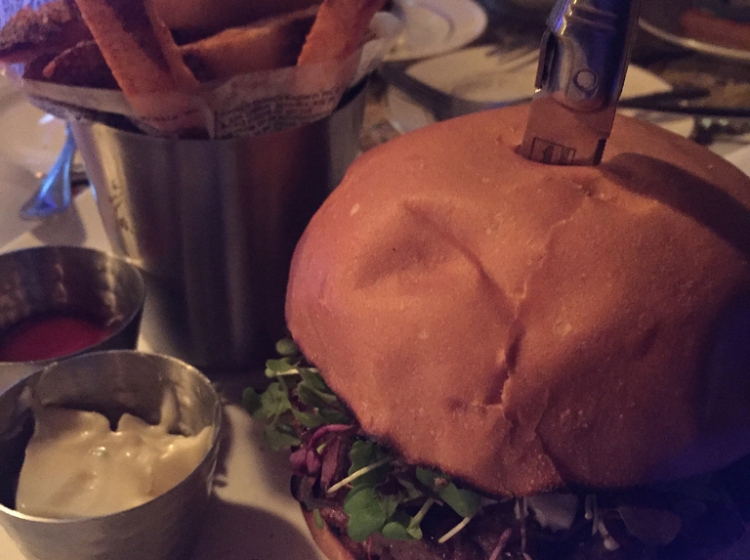 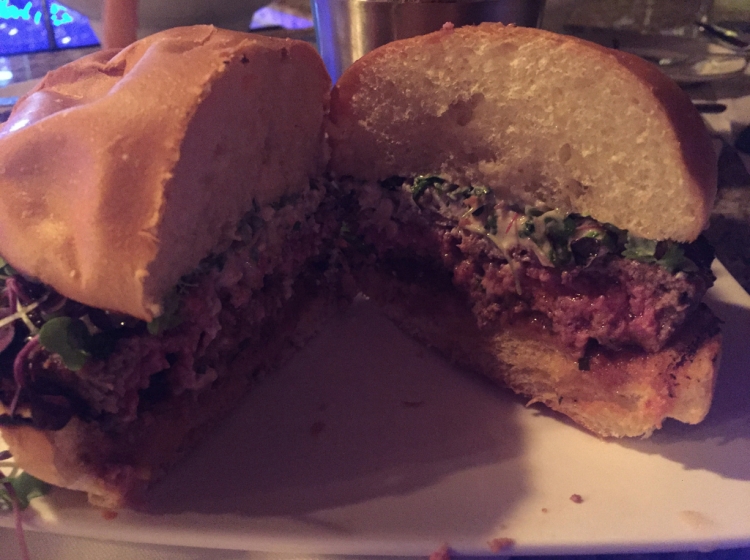 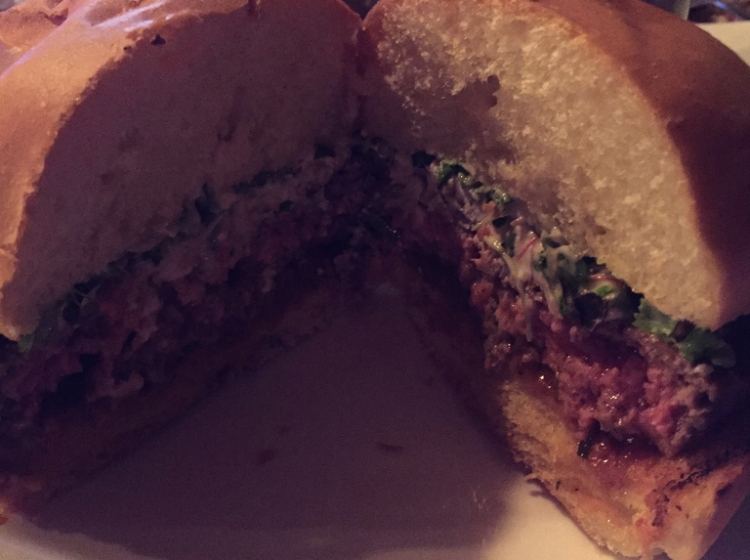